eTechTime
Home Mobiles Moto G4, Avaible on Amazon on June 22 in India
One of the leading smartphone companies, Motorola has started its journey of making smartphones and attracting people in 2009. Since then onwards it has been there amongst the leading smartphone making companies on India and in the outer world as well.Recently,this company has announced its new model in market Moto G4 in an amazing price of Rs. 13,499, which is about to rock the market of India soon.The announcement came in the form of a tweet from the company’s India subsidiary. It is heard to be in India on June 22 and will be out exclusively in Amazon. Moto G4 comes in 2 versions:the first one is  2GB RAM and 16GB storage for Rs 13,499 and the second one is with 3GB RAM and 32GB storage for Rs 14,999. It will be out in market with another model of Motorola, Moto G Plus. 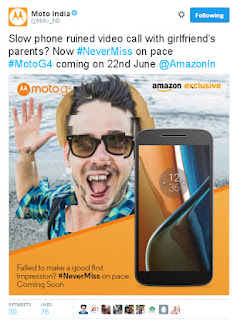 Motorola says that the Moto G4 comes with “great features in a phone that’s built to last.” It has been told to be customer friendly has the company is offering for two years worth of free storage with Google photos inits original quality. Online shopping facility is making the new generation smarter than ever. Just like Flipcart, Amazon is also involving itself in launching the products in India which has become trustworthy with its services, easy returns and 100% original products. This smartphone will equally be awesome when it will give us its first look on Amazon.